Back to all posts

Undertaking an EP or Album recording for your band is a costly process. Tracking, editing, mixing, and mastering are the 4 major stages of recording, and if you’re on the studio clock then expect to pay dearly! Even buying the right gear and self-producing can be just as costly and is a risk to any band without an experienced member in the group. Fortunately by adding some key affordable items to an existing demo-style setup you can lower the cost of studio time by allowing yourself to track DI guitars and bass at home. These can then be used for reamping during your mixdown.

If you or 1 of your bandmates has basic recording knowledge and the following simple setup then this article is for you:
-A computer/laptop
-Some sort of DAW software like Garageband, Reaper, Cubase, Pro Tools etc
-A recording interface with 1 or more channels 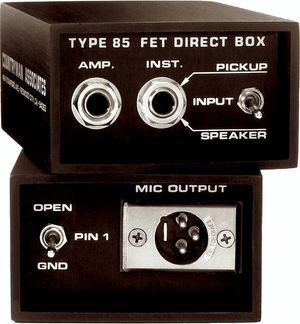 What are DI tracks, and what is Reamping?
Traditionally guitar and bass tracks are recorded live via a microphone on the guitar cabinet. This means that you get your desired tone, mic the cab correctly to capture the sound your ears hear, and record directly to either tape or digital. Reamping is a process by which you record ‘dry’ tracks that a mix engineer can run back through amps and are mic’d up and captured in the usual way. The ‘dry’ track is a clean, unaffected track recorded direct from a guitar through a DI box. A DI box converts the unbalanced, Hi-Z signal of your guitar or bass to a balanced, microphone level for plugging into the mic input on your interface, or a an external preamp.

Why is this different from the DI inputs on your interface? Well unless you have a high-end interface (which may cost thousands of dollars) chances are that your interface has sub-par DI inputs. An external DI is relatively low-cost, and will make a huge improvement to your direct tone by maximizing the headroom of your signal – which boils down to more of your guitar’s tone hitting the tape. Your tracks will be brighter, have more pronounced mid-range and extended low-end. That all equals good!

Which DI should you buy?
Well there are 2 main types of DIs: Active and Passive.

Any of these will get you great results, so get what you can afford. The Passive JDI and Active Type 85 are definitely the pick of each category and are industry standards. They’re kinda like a Shure SM57 – super cheap but used in studios across the world and on too many records to count!

How to use them…
The best way to first ask the person who is mixing your album what file format you should use. Generally you’re going to record at 24bit, 44.1 or 48K sample rate. SET THIS WHEN YOU CREATE YOUR SESSION!

Then to use the DI simply plug a high quality guitar lead from your axe into the DI’s input, then a high quality XLR (mic lead) from the DI’s output into a microphone input on your interface. If your guitar’s pickups are high output you may want to engage the ‘Pad’ button on the DI, which will drop (or attenuate) the incoming signal by a set amount. You’ll then want to adjust the gain knob on your interface so that when you’re playing that the loudest parts are hitting the track somewhere between -18dBFS and -9dBFS on your DAWs meters so you leave plenty of headroom and don’t clip.

Put a software amp simulator on your track to dial in some distortion for monitoring purposes. This sound won’t actually ‘print’ to the track but will allow you to get the right feel when tracking along to your drums or click track. Lay all of your parts down, edit and tidy up the changes with crossfades and you’re done! All you have to do is export/bounce/render each track in the same format as your engineer specifies and then they’re ready to be reamped!

Who will Reamp for you?
If you’ve organized an engineer to track the rest of your album and mix it too, then this is your best bet. While many studios are equipped for reamping these days, it’s best to still raise that when discussing the album project with potential studios or engineers. It’s very much the same as tracking normal guitar except that the signal comes from the computer through a reamp box into the amp instead of from a player, so any engineer you trust to mic up and record your amp should be able to reamp.

If you have a great amp then use that, but if not then you can hire or borrow an awesome one for the reamp session. You won’t have to have it for too long as your parts are already tracked and edited so it’s just a matter of pressing ‘record’ and letting the machines do the work. It will still take a while though as each track must be reamped 1 at a time – if you have a 10 minute song with 4 guitar parts it will take you at least 40 minutes (4x10mins) plus extra to get setup and press stop and record etc. Be sure you calculate a good amount of time.

Many guitarist-turn-engineers offer affordable online reamping services whereby you send your raw DI tracks and choose the types of amp you want used from a list that they provide. You can find people in the local scene who will do this or even people overseas who post on sites such as ultimatemetal.com or gearstluz.com – do a search on the site for ‘reamping’ and you’ll see people posting about their rigs and contact details. Always ask for a sample first and try to pay with Paypal or something secure.

Other Advantages!
You could begin your guitar tracking at the demo or preproduction stage and deliver complete, tight, temp-mapped guitar parts to your drummer to do his practice and tracking to, and then reamp the very same parts later during mixing. Recording DI means that you can also do it on your schedule at any time of the day or night on your own schedule in your bedroom with headphones and still end up with monstrous tone!

Next time your band is recording consider the possibility of DI tracking. It’s not often that you can spend only $200-250 and receive a world class device that allows you total flexibility, and high quality tracking. Do some further reading, trawl eBay, and good luck!

Ps. For the more adventurous enthusiast, check out the Ferrite DI from diyrecording.com – it’s a great starter project for a potential DIYer and under $100 too!