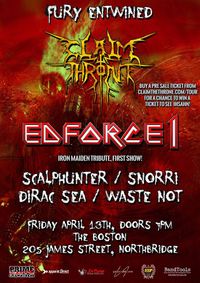 This show delivers a massive mixed bag of heavy goodness! Spooky Friday 13th gives us a 6 band lineup of mixed genres and good times to unite with a variety of metal in Perth.

CLAIM THE THRONE (Melodeath / Folk Metal) Fresh from a huge headlining national tour, plus support with Wintersun through Australia and Japan, CLAIM THE THRONE are back for another huge local Perth show! With a recently announced European tour coming soon, these ruthless heroes are sure to be in top form with an extended set list of merciless tracks from the latest album ON DESOLATE PLAINS.

SCALPHUNTER (Punk / Thrash) Bringing a lust for hard, fast, ear shattering rock and roll, SCALPHUNTER will be joining the heavy festivities with a speedy dose of hardcore and punk. These guys pump out one of the loudest and fastest rock and roll show in Perth and will keep the party rolling!

EDFORCE1 (Iron Maiden Tribute Band) The first ever live gig of Perth’s first ever Iron Maiden cover band! EDFORCE1 features kickass muso’s from some of Perth’s best metal acts and will be closing the night off to bring the punters together for singalongs and plenty of fun.

SNORRI (Black Metal) Relentless black metal up and comers SNORRI will bring a harsh and pitiless intensity with their ritualistic themed show. Recently announcing supports with Ihsahn and Mortiis give a fair idea of what to expect.

DIRAC SEA (Doom) Delving into the proceedings with eerines and atmosphere, DIRAC SEA’s post-doom stylings will weave interludes that set a tone for the night ahead.